Seventy-five years ago nearly 34,000 Jews were murdered at Babyn Yar over a two-day period on September 29th and 30th 1941. The location has become a poignant symbol of what is known as The Holocaust by Bullets. Some 1.5 million Jews were shot to death on the territory of what is now Ukraine in this particular aspect of the Holocaust.

The program, held in Kyiv from September 23rd to 29th this year, featured four distinct projects. There was a public symposium, which included the introduction of a groundbreaking book on Babyn Yar; a student conference; a landscape design competition; and a memorial concert.

The effort took years of planning and was widely applauded both in Ukraine and abroad. The UJE worked with the World Jewish Congress, Ukraine’s government, and other Ukrainian Jewish and diaspora organizations to plan and present its program.

UJE board member Paul Robert Magocsi, who along with his colleague Adrian Karatnycky spearheaded the program, noted, “Our goal was to turn the attention of Ukrainians and the world community to Babyn Yar and to show it is a very important symbol of a mass tragedy of the 20th century,”

A special feature of the public symposium was the presentation of the newly published book Babyn Yar: History and Memory. The book, published both in English and Ukrainian, presents essays written by ten authors, including several symposium participants. They looked at the treatment of Babyn Yar in art, culture, and literature.

Dr. Vladislav Hrynevych, who co-edited the book with Dr. Magocsi, said, “This book is not about death but about life, and about the battle for memory about Babyn Yar. It also raises the question of what is the future of Babyn Yar. How is it to be organized?”

Nearly two hundred young people from all over the world attended the youth conference. The conference coordinator, Dr. Ihor Shchupak of Dnipro’s Tkumah Institute for Holocaust Studies, said. “We were able to get away from national egoism. We remembered that our country was touched by three genocides: the Holodomor, the Holocaust, and the deportation of Crimean Tatars. We also talked about the Holocaust against the backdrop of the contemporary Russian-Ukrainian war. We understood there is no such thing as someone else’s pain.”

Another highlight of the week was the presentation of winning entries of an international landscape competition sponsored by the UJE as a first step in the expected creation of a necropolis at Babyn Yar.

There was no first-place award as the jury did not feel any of the entries fulfilled all its requirements. However, Vitaliy Nakhmanovych, one of Ukraine’s leading Babyn Yar historians who oversaw the competition, said the two second-place winners and a third-place winner provided a promising foundation for the creation of a memorial park at Babyn Yar.

The UJE board chairman James C. Temerty presented the competition winners with awards. 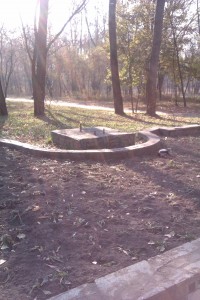 The commemorative week concluded with a memorial concert, which featured the Hamburg Symphony Orchestra, the renowned Ukrainian Dumka Chorus, and international opera stars, including Pavlo Hunka of England. Ukraine native Oksana Lyniv, who currently works with the Bavarian State Opera in Munich, was conductor and the opera director Annechien Koerselman of the Netherlands staged the powerful performance.

Approximately 160 people were involved in the performances of Max Bruch’s prayful Kol Nidrei; the Kaddish-Requiem by Yevhen Stankovych, based on the poems of the Ukrainian writer Dmytro Pavlychko; and A German Requiem by Johannes Brahms.

Amidst all these events, one distinguished visitor to Kyiv was World Jewish Congress President Ronald S. Lauder. He called Babyn Yar “one of the most infamous pieces of ground in the entire world.”

Lauder also reminded us why this commemoration is not only about loss, but also about hope, and the future. He said, “We are here in Kiev for one more important reason: We are here to celebrate the rebirth of a strong Jewish community here in Ukraine. This rebirth is nothing short of a miracle.”