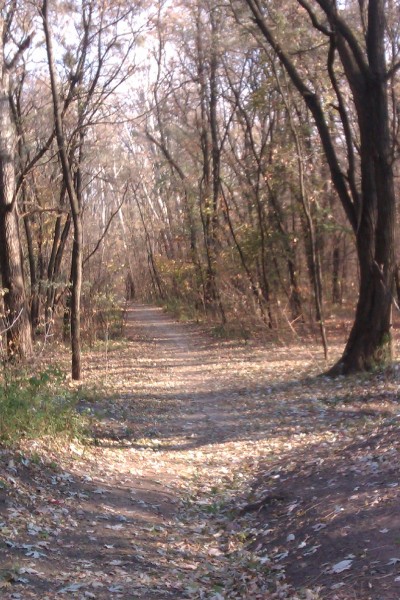 Today we look at symbols and mythologies. When competing narratives on history clash, the battle over symbols becomes heated and emotional.

Vitaliy Nakhmanovich is a Ukrainian historian who has written extensively on the formation—and manipulation—of national memory. He has been particularly incisive in analyzing the politics of memory.

Nakhmanovich contributed an important essay to the book Babyn Yar: History and Memory, which was recently published to commemorate the 75th anniversary of the tragedy.

His essay, entitled “Babyn Yar: A Place of Memory in Search of a Future” details the complex—and sometimes cynical—debates over the symbols of commemoration in a contested landscape of memory.

Nakhmanovich points out that Babyn Yar provokes a confrontation. During the Soviet era this was a confrontation between the public’s need to honor the memory of Jewish victims of the Nazis and the actions of the Soviet government trying to impose an artificial memory of events.

The Soviet authorities also physically destroyed the scene of the crimes at Babyn Yar. Nakhmanovich reminds us Babyn Yar was flooded with a deluge of pulp from nearby brick plants in the 1950s. This resulted in a notorious mudslide in 1961, when the pulp smashed through a flimsy dam and destroyed Kyiv city neighborhoods, killing many people.

In subsequent decades new streets were laid across the filled-in ravine at Babyn Yar. Nearby cemeteries—Jewish, Orthodox Christian, Karaite, and Muslim—were closed, destroyed, and built over to a large degree.

In 1976 the Soviets put up what Nakhmanovich calls a pretentious and tasteless monument at Babyn Yar. The monument was dedicated  “to the Soviet citizens and captive soldiers and officers of the Soviet Army who were shot by the German fascists in Babyn Yar.” Four out of seven small ravines that remained at the very summit of Babyn Yar were destroyed. 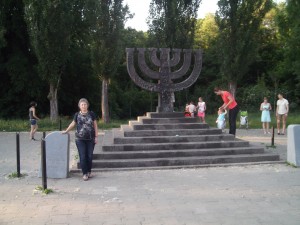 After Ukrainian independence in 1991, the monuments and their symbolic meanings became more inclusive. There were joint commemorations of Jewish victims by the Jewish and ethnic Ukrainian communities as well as by state leaders.  The Menorah Monument was dedicated to the memory of the Jewish victims.  A commemorative marker in honor of the prisoners of the Syrets concentration camp was also placed.

Since then there have been additional monuments and markers dedicated to other victims such Ukrainian nationalists, Orthodox Church priests, children, and the Roma. Debates continue over proposed new monuments.

Nakhmanovich reminds us that we must turn to various mythologies to make sense of the continuing battles over memorials at Babyn Yar.

One mythology places what is called the “Great Patriotic War” as an event that was and remains the justification of the entire history of the Soviet period. This Soviet mythology does not accept the exceptional nature of Jewish victims, as the Slavic peoples suffered the greatest losses.

Another mythology focuses on the heroic and sacrificial nature of those who fought in the long and bitter struggle for Ukrainian statehood.

However, the Jewish community and the world beyond Ukraine view Babyn Yar as exclusively a symbol of the Holocaust. But for Ukraine it is a symbol of many tragedies that took place during the Nazi occupation. 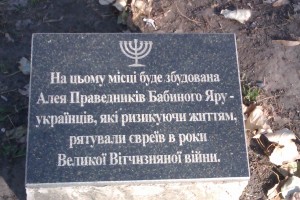 For the city of Kyiv, it is also a symbol of its long history before and after World War II. This history includes the burial of victims of the Famine of the 1930s and Soviet terror in the cemeteries adjacent to the ravine, the sacrilegious destruction of a historic necropolis, as well as the mudslide.

Nakhmanovich notes that the absence in today’s Ukraine of a shared memory of World War II and the Holocaust complicates the search for consensus on the very meaning and symbolism of Babyn Yar.

Nonetheless, he reminds us the reconciliation of Ukrainian and Jewish national memory depends primarily on the wisdom and vision of Ukrainians and Jews in developing a common future within Ukraine, as a country.