In this edition of Ukrainian-Jewish Heritage, we will be discussing In Broad Daylight – The Secret Procedures behind the Holocaust by Bullets by Father Patrick Desbois. 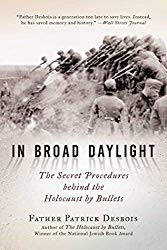 In 2008, Father Patrick Desbois published The Holocaust by Bullets – A Priest’s Journey to Uncover the Truth Behind the Murder of 1.5 Million Jews. It described how Nazi mobile killing units, called the Einsatzgruppen, murdered more than a million people in Eastern Europe during World War II. His new book In Broad Daylight continues this gruesome narrative based on over 4000 interviews, as well as recently released Soviet archival materials.  This new book explains how Jews were killed in broad daylight with the co-operation of their non-Jewish neighbors. “The way in which these crimes unfolded, from the predawn hours well into the night, remains little known to the general public.  The goal of this book is to remedy that.” (p. xi)

As a young priest, Desbois discovered that his grandfather witnessed mass murders of Jews at the Rawa Ruska camp on the Poland-Ukraine border as a French prisoner during World War II.  As a result, Desbois started searching for the mass graves of those killed by the Nazi mobile killing units called the Einsatzgruppen. With a dedicated team of volunteers, Desbois travelled through Ukraine, Belarus and Russia interviewing aging witnesses who described the horrific massacre of the Jews. He described his initial research in The Holocaust by Bullets (2008).  In his second volume, In Broad Daylight, he explains, “How the crime took place, the process by which it became concretely possible.” (11) 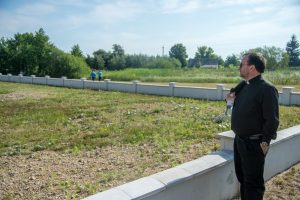 This heart-breaking but intensely compelling book describes the people and the process used in the holocaust by bullets including: the architect, the requisitioned, the diggers, the rapes, the transporters, the layers of planks, the cooks, the shooters, the curious children, the fillers, and the sanitizers. Desbois writes with both clarity and purpose, drawing even reluctant readers into a narrative about man’s inhumanity to man.  Perhaps the most shocking aspect of his description of “the method,” is that German soldiers only did the actual shooting of the Jews.  All the other work – creating the ghetto, transporting the condemned people, digging the graves, laying the planks, filling the pits, cooking for the shooters, and selling the clothing and possessions of those killed – was done by “requisitioned” villagers.

The stories told by the now elderly people who were complicit in the murders are both shocking and unbelievable. Some speak dispassionately about their participation in these atrocities.  A witness called Andrei, “spoke of his neighbors the way we speak of animals.” (p. 35) In sharp contrast, a witness named Gregory described how he tried to shelter some Jews in his home. Desbois concludes that these very different stories show the reality of the holocaust by bullets. “Between the stories of Andrei and Gregory, there was an abyss – the abyss of human responsibility” (p. 43).

In Broad Daylight is a very difficult book to read, but at the same time, it is an important addition to the history of the Holocaust. Desbois writes with brutal realism, yet he manages to capture the imagination of readers while describing unbelievable atrocities committed in the name of the Nazis. “The Germans chose a family, raped, stole, and then killed.” (p. 72) In sharp contrast, there are many stories of friendship between villagers and Jews. “Alexandra loved Ziama as a young girl loves a young man. The Nazis’ intended fracturing of the human race could not touch their love.” (p. 97) The details of the “method” of killing the Jews are horrendous: the music playing during the shooting, the wounded victims being buried alive in the pits, and the cooks preparing feasts for the Einsatzgruppen after the massacres. “It took many pairs of hands – voluntary, requisitioned, or forced – to ensure that the Jews were publicly murdered.” (p. 256)

Father Desbois has written a heart-breaking but very insightful addition to the history of the Holocaust which he began in his book The Holocaust by Bullets. Readers could order both of these books and read them in order; however, it may be difficult to read them together because of the emotions which will inevitably arise. In Broad Daylight is a stark reminder that we need to learn from history so that these events will never be repeated!

Father Desbois is a Catholic priest and Professor at Georgetown University’s Center for Jewish Civilization. He is President of Yahad–In Unum, a global humanitarian organization dedicated to identifying and commemorating the sites of Jewish and Roma mass executions in Eastern Europe during World War II. The Holocaust by Bullets won the 2008 National Jewish Book Award. He has also been recognized with the Humanitarian Award from the US Holocaust Museum, and the 2017 Lantos Human Rights Prize. In 2018, he published The Terrorist Factory: ISIS, The Yazidi Genocide, and Exporting Terror (2018). He currently lives in Washington D.C. and Paris, France.

This has been Ukrainian-Jewish Heritage on Nash Holos Ukrainian Roots Radio. I’m Myra Junyk in Toronto. Until next time, Shalom!

In Broad Daylight and The Holocaust by Bullets are available at Chapters/Indigo and Amazon.

Please support our work by purchasing these books using our link. There is no additional charge to you but it sends a few cents our way. Дякую! Thank you!