Stories continue to surface about people in Ukraine and surrounding areas who saved Jews from the Nazis during the Holocaust in WWII. Each one of them is heart-rending and inspiring in its own unique way.

But one story that has emerged very recently is particularly astonishing. It is the story of a Crimean Tatar woman who saved the lives of 88 Jewish children not once, but twice. First from the Nazi Gestapo, and again two years later, from the Soviet secret police, the NKVD.

The story has come to light as the result of a film recently released in Ukraine and screened in Canada and the United States. The film recounts events of the Holocaust, but through the prism of another genocide—the 1944 deportation of the Crimean Tatars—which itself has come to light only recently.

In April of 1944, Soviet forces regained control of Crimea after more than two years of Nazi occupation. But almost immediately after the peninsula was liberated, it faced a new wave of repression from its liberators. In May of 1944, on orders of Soviet dictator Josef Stalin, Crimean Tatars were deported en masse. Many died in transit or were killed by the NKVD, the Soviet secret police. Many others perished from inhumane treatment and conditions during transit and resettlement.

The film Чужа молитва tells this tragic but inspiring story of the rescue of dozens of Jewish children twice during WWII. The title translates as A Prayer of Strangers, or Alien Prayer.The story is based on real life historical events and characters.

Saide Arifova was a Crimean Tatar woman running a kindergarten in the small city of Bakchisaray when the Nazis invaded the Crimean peninsula in 1941. As they were being rounded up by the Nazis, the Jews of Bakhchysarai tried to save their children by sending them into hiding. Some of the children found Saide Arifova’s kindergarten and sought refuge there.

Deathly afraid, at first she refused. But compassion won and she agreed to shelter them. Since the Nazis had recently ordered her to harbour the street children of Bakchisaray, her kindergarten had become essentially an orphanage. So Saide hid the Jewish children in plain sight. She did this by giving them each a Crimean Tatar identity. She forged documents and switched identities by tampering with state documents to give them each a new name and life story. She taught them Islamic and Tatar traditions so they could pass as Crimean Tatars. To complete the picture, she taught them how to pray like Crimean Tatars.

It was a dangerous time. The Nazis were constantly suspicious and always on the lookout for Jews. At one point they called Saide in for questioning and beat her savagely. But she held fast to her story. The true identities of the Jewish children remained secret until the end of the Nazi occupation.

This daring rescue saved the Jewish children from the Nazis. It also saved them from the next unexpected wave of terror by the Soviets. But this second time, Saide’s luck ran out.

No sooner had the Red Army “liberated” the Crimean peninsula from the Nazis, than it unleashed its own murderous attack on innocent civilians. This time the target was the Crimean Tatars. Stalin ordered them departed en masse on the false accusation of having collectively collaborated with the Nazis.

Over 180,000 Crimean Tatars—nearly 20% of the peninsula’s entire population—was deported. They were herded into crowded, uncomfortable and unsanitary train carriages, on virtually no notice, in a matter of just three days. Crimean Tatar men fighting in the Red Army were demobilized and sent into labor camps in Siberia and in the Ural mountains. Civilians were shipped off to Uzbekistan in Central Asia and remote regions in Russia.

The majority of the civilian deportees were women, children and the elderly. Conditions of the transfer were exceedingly harsh, and fatal for many of them. The weakest ones soon succumbed to malnutrition, thirst, cold, overcrowding and infectious diseases in transit and the ill-prepared settlement camps. It is estimated that up to half perished within the first 18 months of exile.

Saide Arifova and her entire orphanage were about to hauled away by the NKVD when she revealed the long-hidden birth certificates of her Jewish charges. The NKVD let the Jewish children go, but Saide and the Crimean Tatar children were shipped off to Uzbekistan.

It was only after Ukraine gained independence in 1991 that Saide was able to return to her home town of Bakchysaray in Crimea. She passed away in 2007. 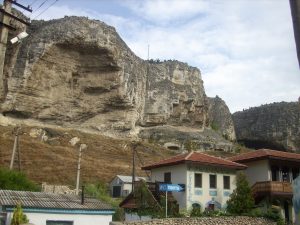 Just a few years later, history would repeat itself. The Kremlin struck again and in 2014 successors of the NKVD captured the Crimean peninsula. Today, Russia once again occupies the area.

Ironically, this second Russian occupation of Crimea has helped to shed light on the first, and on the genocide that followed. As scholars became aware of it, they pushed to open secret archives and survivors began to speak of it. A popular Ukrainian singer of Crimean Tatar descent released a song which won the 2016 Eurovision contest. The lyrics for Jamala’s song 1944 is based on the story of her great-grandmother who was deported in 1944. It became the theme song for the film Чужа Молитва, A Prayer of Strangers.

The director of A Prayer of Strangers is a Crimean Tatar born in exile in Uzbekistan in 1972. Some episodes in the film are based on his own family’s stories. He knows the Crimean Tatar Muslim prayer well.

During the Soviet era, it was forbidden to even mention the 1944 Crimean deportation. Now, despite the displeasure of the Kremlin’s current occupants, the story is becoming better known outside Russia. But in Russian-occupied Crimea today, Tatars are again forbidden to hold public commemoration of the victims of the deportation in their native land. And they face repressions which are little-known and seldom reported in the western media.

Last year, it was released with English-subtitles and the title 87 Strangers. It screened in Toronto and Ottawa in the fall of 2018, by Crimean Tatar organizations in Canada, in cooperation with the Ukrainian Canadian Film Festival. It has also been screened by a few Jewish organizations in the United States.

An interview with the director of A Prayer of Strangers by Ukraine’s public broadcaster Hromadske Radio can be found in Ukrainian and in English translation at the Ukrainian Jewish Encounter website. It is titled, A Boomerang of Goodness.

In the next episode of Ukrainian Jewish Heritage here on Nash Holos Ukrainian Roots Radio, we will air an interview with Adrian Zwicker, an Austrian actor who played the role of the Nazi SS officer in the film.

So, until next time, Shalom!