Poetry in a time of war.

Such is the headline by the German newspaper Frankfurter Allgemeine Zeitung, or FAZ, in its recent reporting on the dynamic annual poetry festival Meridian Czernowitz, held earlier in September in the western Ukrainian city of Chernivtsi.

Why war? Because the newspaper picked up the subtle influences of the war with Russia in the East on this gracious city far from the front. As international literati gathered to celebrate the word, young men in camouflage and stony faces marched under the chestnut trees.

Such was the name of this city from 1774 to 1918 when it was the capital of the Imperial Austrian crownland of Bukovina under the reign of the legendary Habsburg dynasty.

In this period it became known as a “Little Vienna” due to its architectural style. And also for the fact it was the home of a growing German-speaking community and German-language university.

But the city was always cosmopolitan—a center for both the Ukrainian and Romanian national movements. And in 1908 it was the site of the first Yiddish language conference. Not surprising, as nearly a third of the city by this time was Jewish. 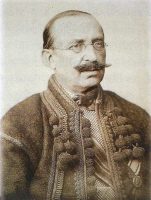 The stories of this city and surrounding region have been told in many languages. By the Ukrainian writers Olha Kobylianska and Yuri Fedkovych. The German novelist Gregor von Rezzori and the Israeli writer Aharon Appelfeld. Czernowitz, now known as Chernivtsi, gained a lasting literary mystique.

Above all, it is famous as the native city of the Jewish poet Paul Celan, who wrote in German. His renowned and very much analyzed poem ”Death Fugue” became a sensation for its metaphorical evocation of the Holocaust. The opening lines of the poem read, ”Black milk of daybreak we drink it at nightfall / we drink it at noon in the morning we drink it at night.”

Born in Chernivtsi in 1920, Celan is considered one of the greatest poets ever to have written in the German language in the twentieth century. He survived the Holocaust, but his parents did not. He carried a heavy burden of survivor’s guilt and depression and committed suicide in Paris in 1970.

Celan wrote of Chernivsti as a meridian, a kind of immaterial bond that unites people all around the world.

Thus the Meridian Czernowitz International Poetry Festival. It is an event built on the foundation of the cultural heritage of Chernivtsi. It celebrates a historical memory and literary legacy of its inhabitants.

The stated purpose of the festival is the return of Chernivtsi to the cultural map of Europe and the development of dialogue between contemporary Ukrainian poets and their foreign counterparts.

Yevhenia Lopata, the director of the festival, told the website Ukrainska Pravda, “Everything was under our feet. We just needed people who could gather all of this, systematize it, and create an event.”

Of course what was underfoot was the multicultural history of Chernivtsi and the multiplicity of languages. And thus one of the central features of Meridian this year was “Like They Do in Babylon.”

Groups of poets from various nations would gather on stage, or under the open sky in the center of the city. They read the poems they wrote in their original language. Their fellow poets would follow with translation, or even several translations. And there would not only be translations, but interpretive riffs on the original, or a collage based on motifs from several poems.

This Bukovinian Tower of Babel showed, as reported by the FAZ and other German-language media now intrigued by the festival, that Chernivtsi has a European past and a European future. And thankfully, in these times of war for Ukraine, the muses have not fallen silent.

Another Chernivtsi native, the former Soviet dissident and Ukrainian Jewish activist Josef Zissels, was interviewed by the Polish journalist Isa Hruslinska. Their book was presented at this year’s Meridian Czernowitz. According to Zissels, God has divided people by different languages and histories, because such a world seemed to him more beautiful and more variegated.

“A homogeneous world is uninteresting,” says Zissels. “And God is an aesthete.”