History, trauma, and the museum space. Museums can offer many faces to the world. From dusty collections of artefacts to dramatic arenas outlining—or avoiding—compelling national or cultural narratives.

A recent lecture sponsored by the Center for Urban History of East Central Europe in Lviv looked at the role museums play in tackling difficult issues of history.

Vadim Altskan, originally born in Ukraine, is a historian specializing in Eastern European, Balkan, and Jewish history. He is a Project Director for the International Archival Programs at the U.S. Holocaust Memorial Museum’s Center for Advanced Holocaust Studies.

Altskan’s lecture was entitled “The Missing Page in Museums: The History of Jewish Communities as Part of the Multiethnic Heritage of Ukraine.”

The challenge of integrating the history of the Jewish communities of Ukraine into the museums and educational systems of contemporary Ukraine is not a problem unique to that country alone.

Ukraine’s neighbors in Eastern Europe and the post-Soviet space have grappled with this issue with varying degrees of frustration and success.

Altskan made the fundamental point that to provoke interest in other people’s lives requires you to show who they were, how they lived, and why they are no longer here. Museums play a key role in showing, or not showing, all of this. 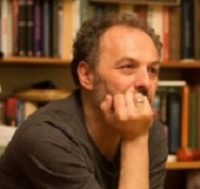 So how is Jewish history presented in Ukrainian museums today? Altskan noted the national network of privately funded Jewish museums, with the largest in Dnipro, and others in Odesa, Chernivtsi, Kharkiv, Kryviy Rih, Khmelnytsky, Kherson, Kyiv, and Lviv. Some interesting temporary exhibitions are now being held in state museums, most recently in Lviv.

Altskan forthrightly listed the problems in developing a jointly acceptable Ukrainian and Jewish narrative for museums and the educational sector. There is a vague and distorted knowledge of each other’s history. There is ethnocentrism. There are viewpoints that don’t fit into the well-established concerns and canons of each community’s history.

Altskan identified five problematic areas of history. They include the Khmelnytsky Cossack uprising against the Poles in the 17th century. There was the Haidamak popular rebellion against the Polish regime in the 18th century. There were the pogroms in Russian-tsarist ruled central and eastern Ukraine in the 19th century. There was the bloody Civil War after the Russian Revolution of 1917, followed a couple of decades later by the Holocaust. Altskan asked how all these historic events could be treated by both nations. Do we see these events differently? And why? All of this is aggravated and complicated.

Altskan underlined that for much of their history Jews and Ukrainians lived in two solitudes, in two parallel worlds. While a Jewish-Ukrainian dialogue gathered speed in the late 19th and early 20th centuries, fueled by emerging nationalism and Zionism, the Ukrainian state building project failed to be implemented after the First World War. This tragic failure laid the foundation for worse relations for much of the 20th century. Both nations accused each other of betraying the other.

Ironically, as Altskan pointed out, the Ukrainian-Jewish dialogue re-emerged later in the camps of the Soviet gulag. Jews and Ukrainians shared the same physical space, could openly speak with each other, and despite differences shared the urge for freedom. This laid the foundation of a new dialogue, augmented by developing academic contacts between the Jewish and Ukrainian Diasporas in the West.

And of course, as Altskan reminded us, Jews and Ukrainians now have their own independent states and can interact as equals. Furthermore, third parties can’t interfere with this dialogue.

The challenging question now, as Altskan asks, is what kind of history should we teach and show now in museums? The answer is to avoid a black and white approach. It should be multi-dimensional, with many tints and colors.

In Altskan’s view, Ukrainian historians and museums should refrain from heroic myths and controversial figures that alienate non-Ukrainians. And Jewish historians should reject outdated Ukrainophobic approaches.

A “usable” past for both Jews and Ukrainians can stress the more positive features of neighborly relations between the two communities. Find heroes who are consolidating for Ukrainian society. Those figures who built the economy and industry. Oral history on the local level builds bridges to another culture. As an audience member said in response to Altskan’s presentation, people today want to find out how people in the past lived, what brought them together, not what divided them.

Altskan underlined that young Ukrainians today are free people who have never experienced slavery. This is crucial for the development of a civil society. It will be a gradual and lengthy process, as the examples of neighboring Poland and Lithuania show. And museums, telling the story not only of Ukrainians but everyone who was in Ukraine, are important in shaping that civil society.