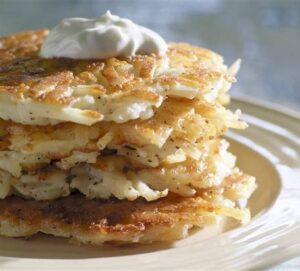 Hanukkah is a joyous holiday, celebrated every year by Jews around the world with the lighting of candles on a candelabra called a menorah, or hanukkiya* in modern Hebrew.

Traditional Hanukkah treats include potato latkes, called  plyatsky or deruny in Ukrainian, and sufganiyot, doughnuts with jam, called pampushky in Ukrainian. There is also a tradition to give Chanukeh gelt—coins, and more recently gifts— to children. And there is a special Hanukkah dreidel (E.top,Uk.dzyga) game. A dreidel is a top, or dzyga in Ukrainian.

Hanukkah is actually a relatively minor Jewish holiday. There are no religious restrictions on work … other than a few minutes after lighting the candles.

In North America, however, as a symbol of Jewish identity, Hanukkah has assumed a place equal to Passover … largely due to its proximity on the calendar to Christmas. As a result, in this part of the world, Hanukkah has integrated several Christmas-related customs, in particular, extensive gift-giving and Hanukkah parties. The lit menorah is displayed in windows or at the doors of Jewish houses during the festival, alongside neighbouring Christmas lights.

In Ukraine,  during Soviet times, it was a very different story. Judaism could not be practiced freely under the atheist regime. In fact, it was dangerous to do so. There was no place and certainly no opportunity to buy a menorah. It wasn’t even possible to see a menorah in museums, as it was considered a forbidden religious item. The menorah was banned by the communist regime. Yet observant Jews managed to keep the tradition secretly. Even Jewish prisoners in Soviet jails and concentration camps (gulags) stubbornly sought a way to fulfill the commandment. If they were not able to find candles or a vessel to fill with oil, they made Hanukkah lights out of a half potato with sunflower oil and wicks out of cotton.

Hanukkah is known as Festival of Dedication and also Festival of Lights. It commemorates the victory of the Maccabees over the Syrians in 165 B.C.E. The Syrian invaders wanted Jews to renounce their G-d and turn to idolatry. That was a fool’s errand.

Hanukkah also honours the memory of the re-dedication of the Holy Temple in Jerusalem.  The Temple had been defiled by the Syrians who, among other things, erected a statue of Zeus in the Temple.

An integral part of the Temple service was keeping the light of golden menorah candles burning all the time. Only high quality olive oil produced by priests in ritual purity was acceptable to be used in this service.

The tradition tells us that when the Temple was re-captured by Jews, only one small vessel of consecrated oil was found—enough for just one day. The oil was immediately lit and, miraculously, it sufficed for eight days until new oil was prepared. Jewish sages established Hanukkah as a festival for this length of time to commemorate the miracle, and the triumph against religious oppression.

Today, as in years past, lighting the menorah is the essence of celebrating Hanukkah. Every Hanukkah night Jewish families get together to light the menoras—with oil to commemorate the miracle of the Temple, or just with the usual candles. Each night of the festival an additional candle is lit until on the last night, eight candles are burning. Each candle has its own special meaning.

On the First Night: A Light for Freedom

On the Second Night: A Light for Tolerance

On the Third Night: A Light for Peace

On the Fourth Night: A Light for Courage

On the Fifth Night: A Light for Knowledge

On the Sixth Night: A Light for Tzedakah – Charity

On the Seventh Night: A Light for Responsibility

On the Eighth Night: A Light for Continuity

Today Jews in Ukraine celebrate Hanukkah freely. The Jewish community gatherings on Hanukkah demonstrate the triumph of the deeply-held belief in the Almighty over totalitarianism, just as with the first Hanukkah, faith triumphed over idolatry and oppression.

On this Hanukkah, as on every Hanukkah, Jews wish for each other to be blessed with Lights and Peace in all homes, and for Peace around the World.