In this edition of Knyzka Corner, we will be discussing Timothy Snyder’s, The Red Prince: The Secret Lives of a Habsburg Archduke.

Who can resist a romantic Hapsburg hero who openly embraces the cause of Ukrainian nationalism in the early 20th century? Wilhelm von Habsburg was such a man. Although he died in obscurity in a Russian prison in 1948, Wilhelm made the creation of a Ukrainian nation the cause of his life.

As the son of Archduke Stefan and Archduchess Maria Theresia, Wilhelm led a very privileged life along with his five brothers and sisters. “At the time, their family still ruled the Habsburg monarchy, Europe’s proudest and oldest realm. Stretching from the mountains of Ukraine in the north to the warm water of the Adriatic Sea in the south…” (p. 2) Wilhelm’s parents had castles on a peninsula called Istria on the Adriatic Sea and in Poland. His father believed that Poland would eventually become a separate entity and would need a Habsburg king. He hoped to be that king! During hi 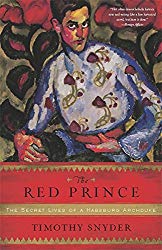 s time at military school in Moravia, Wilhelm became interested in the idea of a Ukrainian state. Perhaps he could eventually rule Ukraine for the Hapsburg monarchy.

In 1914, Crown Prince Franz Ferdinand, the Hapsburg heir, was assassinated in Sarajevo. World War I followed. “Service during wartime was the destiny of Habsburg archdukes.” (p. 83) In June 1915, Wilhelm received command of a platoon in a mostly Ukrainian regiment. He soon became one of them by speaking Ukrainian, wearing an embroidered shirt under his uniform, and calling himself “Vasyl.” His soldiers nicknamed him, “The Red Prince,” because of his support of the Ukrainian peasantry. Eventually, Wilhelm became the diplomatic representative of the Habsburgs in Ukraine. He met several prominent Ukrainians including Metropolitan Andrii Sheptytsy and Hetman Skoropadsky. At the end of the war, the empire had fallen apart, and the Hapsburgs had to give up power. Wilhelm’s dream of a Ukrainian nation did not survive.

After World War I, Wilhelm was at loose ends. His resources were slim after the fall of the Hapsburgs, so he was constantly searching for new sources of income. He promoted various unsuccessful schemes such as making Ukraine a “promised land” for European Jews. He left Vienna for Spain to visit his Hapsburg relative King Alfonso. He later moved to Paris where he continued to promote the Ukrainian cause and live a playboy lifestyle characterized by excessive drinking, homosexuality, and reckless spending. Forced to flee Paris for Vienna after a conviction for fraud in 1935, Wilhelm watched the rise of Hitler and the Nazi Party. How would Wilhelm adapt to this new reality?

Timothy Snyder weaves in wonderful anecdotes about the Hapsburg dynasty into his comprehensive examination of the life of The Red Prince. He does not shy away from the controversial aspects of Wilhelm’s life: his homosexuality, his drinking, his scheming, and his short-lived anti-Semitism during the early days of Hitler. Readers will be surprised by Wilhelm’s role as a promoter of the Ukrainian nation at a time when such a concept was considered remote at best. It is truly fitting that Snyder concludes his book with an examination of the independent Ukraine which Wilhelm helped to build! It should also be noted that this book was written in 2008. Snyder’s praise of Ukraine is ironic. “Simply by existing for almost two decades within unchanged boundaries, Ukraine has already proven more durable than most of its predecessors.” (p. 260). Who could have imagined that Ukraine’s territory of Crimea would be invaded in 2014 by Russia?

Timothy Snyder received his doctorate from the University of Oxford in 1997. Before joining the Department of History at Yale in 2001, he studied in Paris, Vienna, and Warsaw. Snyder has written articles for The New York Review of Books, The Nation, The New York Times and The International Herald Tribune. His award-winning books include: Bloodlands: Europe Between Hitler and Stalin (2010), Ukrainian History, Russian Politics, European Futures (2014) and Black Earth: The Holocaust as History and Warning (2015). In 2015, Snyder received the Andrew Carnegie Fellowship as well as the Havel Foundation prize. He is a member of the Committee on Conscience of the United States Holocaust Memorial Museum, as well as the advisory council of the Yivo Institute for Jewish Research.

The Red Prince is available at Chapters/Indigo and Amazon.