Well in answer to those questions, to say “it’s complicated” is a bit of an understatement. So, let’s take a look at some historical data to uncomplicate it a bit. 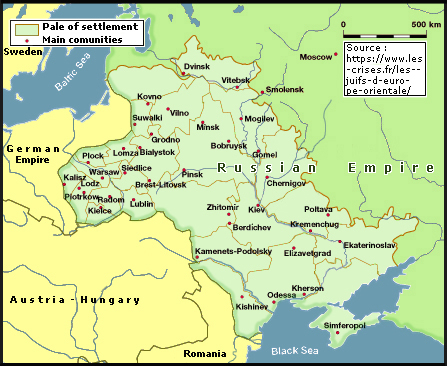 The Pale of Settlement was an area of 25 provinces in Czarist Russia. It was established by Empress Catherine II of Russia, also known as Catherine the Great, in 1791. You could perhaps say it was an unintended consequence of the partitions of Poland. This is a sad and troubling period of history for this once large and formidable empire.

Since before the time of Christ, Jews had lived in this area where they intermarried with, and eventually converted, the Khazar people. But the main migration of Jews into the area began much later. In the early 1300s, the Polish king Casimir III opened the doors to Jews who were being expelled from western Europe. They settled into what eventually became the Polish Lithuanian Commonwealth, an empire that stretched from what is modern day Belarus, to as far as Kyiv and eventually to the Black Sea. This invitation could be considered an attempt to import a middle class, which was virtually non-existent in these regions.

For the most part, Jews co-existed more or less peacefully with the other inhabitants of the Polish-Lithuanian Commonwealth, which as well as Poles and Lithuanians, included Ukrainians, Belarusians, and others. Initially Jews were under royal protection and enjoyed communal autonomy, but over time they became as oppressed as Poland’s Christian subjects. Jews were forbidden to own land, so to survive many became agents for the increasingly corrupt and cruel Polish nobility.

By the mid 16th century, Poland-Lithuania held the principal population of Jews in Europe. While politically the empire was relatively enlightened, it was still nonetheless a feudal society. Day to day life was wretched and hopeless for the serfs and for the Jews.

In the mid 17th century Jews in Ukrainian lands were caught in the crossfire of peasant uprisings against the Polish nobility and the Catholic church. Hundreds of thousands of Jews perished in brutal pogroms, some 700 Jewish communities were destroyed, and untold thousands fled the war-ravaged areas. At the end of it, part of the Ukrainian lands came under the control of czarist Russia.

These uprisings took their toll and by the mid-18th century, Polish Lithuanian commonwealth was in deep financial trouble. It continued to weaken until eventually it was carved up between its three more powerful neighbouring empires: the Habsburgs’ Austro-Hungarian Empire, the German Kingdom of Prussia, and Tsarist Russia. This dismemberment of the Polish-Lithuanian Commonwealth was known as the Partitions of Poland, which took place in three stages from 1772-1795.

As a result of this land grab, at the end of the 18th century, Russia found itself with the largest Jewish community in the world. But Jews had been banned in Russia since the 15th century, so there was no welcome for them, nor for their methods of doing business. Nevertheless, those methods enriched the royal coffers. The Russian Empress Catherine II needed a solution to incorporate this large new population into her empire. So on December 23, 1791 she created the Jewish Pale of Settlement, a territory where Jews were allowed to settle and pursue a wide range of economic activity. However, they were forbidden to move from these former Polish-Lithuanian provinces into the rest of the Russian empire.

Catherine II resisted calls to expel the Jews or push them westward. Instead, she allowed them to remain where they were. She also expanded the Pale slightly east and south into Left Bank Ukraine, which she had already destroyed politically and subsequently absorbed into her empire.

The geographic territory of the Pale of Settlement encompassed parts of Lithuania, Byelorussia (modern day Belarus), and most of Ukraine. In the early 19th century, Russia continued to encroach on its neighbours, and the Pale was expanded to include much of the northern Caucasus, Moldavia (now Moldova) and Crimea.

To complicate matters, there was also an “unofficial Pale.” It consisted of 10 provinces within the Kingdom of Poland. This kingdom was a puppet state Russia created in 1815 when it annexed more Polish lands. These 10 provinces became known as the Vistula provinces, or Congress Poland. Jews living in this area were subject to substantially different rules and regulations than their brethren within the Pale of Settlement. For example, Jews in the Kingdom of Poland could move freely between the Pale and the kingdom. However, they too were barred from the Russian interior.

To even further complicate matters, many Jews also lived in neighbouring areas annexed by the two other empires. But, that’s another story for another day.

Living within the Pale of Settlement was initially beneficial for Jews. Although they were not granted full citizenship as in other areas of Europe, they were given extensive rights within the region. But the political climate in the Pale was volatile and always uncertain. New restrictions were imposed on Jews, only to be eased, then re-established.

Jewish life under Tsar Nicholas I was particularly harsh. During his reign from 1825-1855, he reduced the Pale of Settlement in size, introduced military conscription, rescinded Jewish rights to lease land and keep taverns, and abolished the communal self-management allowed to Jews in Poland.

His successor, Alexander II brought a relaxation of restrictions during his reign from 1855-1881. Some Jews were permitted to settle outside the Pale of Settlement, attend universities, and enter government service.

Life worsened again for Jews after the assassination of Alexander II. Unfounded accusations of Jewish complicity in the assassination sparked a new round of pogroms. His successor. Alexander III reimposed the old restrictions and new ones. New laws restricted the movement of Jews, banned them from participating in local elections, limited the number of Jews allowed into universities and in certain professions, revoked their right to sell alcohol and forbade them to conduct business on Sundays. The government sanctioned pogroms in which Jews were beaten or killed and their personal property destroyed. These pogroms were led by the Black Hundreds, an officially sanctioned reactionary group composed largely of civil servants.

This hostile environment resulted in a mass ongoing emigration of Jews to Western Europe and the United States from the mid 19th century on.

Yet despite the difficulties, the irrepressible Jewish spirit prevailed. Some amazing things happened in the Pale. Jews played a prominent role in the development of commerce and industry, and especially in the growth of major cities such as Kyiv, Odesa, and Kharkiv. Charitable societies were established and grew into a sophisticated welfare system for Jews. Yeshivas, religious schools once the preserve of the elite, sprang up and proliferated, including a school for girls. Literature and newspaper publishing thrived. And new religious movements such as Hassidism & Kabbalism emerged.

The Pale of Settlement effectively ceased to exist during World War I, when Jews fled en-mass to escape invading German forces. But it officially ended in March of 1917. As its first order of business, Russia’s Provisional Government, led by Alexander Kerensky, signed a decree establishing equality for all religions and ethnicities. The edict officially abolished the Pale of Settlement.

This has been Ukrainian Jewish Heritage on Nash Holos Ukrainian Roots Radio. I hope you found this overview of the Pale of Settlement informative.

Until next time, shalom.

–Written and narrated by Pawlina