Rohatyn is a city in western Ukraine with a centuries-old Jewish heritage that was almost completely destroyed by the Holocaust and its aftermath.

Like many cities and towns across Ukraine, however, work is being done in Rohatyn to restore the historical memory of its once-vibrant Jewish community.

Two people are central to this restoration effort. One a Ukrainian resident of Rohatyn, Mykhailo Vorobets, now in his 80s, who lived through the Holocaust. The other, an American woman, Marla Raucher Osborn, who came to Rohatyn to reconnect with her Jewish roots in her family’s ancestral home.

Back in 2014 we were first introduced to Rohatyn, these two remarkable individuals, and their collaborative efforts to restore the memory of, and commemorate, the town’s now-lost Jewish heritage. Those initial collaborative efforts inspired Marla and her husband Jay to establish a non-profit organization, Rohatyn Jewish Heritage.

Big-hearted and hard-working volunteers from nearby communities and around the world come to help with various restoration projects. These include Jewish headstone recovery, mass grave memorials, synagogue documentation, Jewish cemetery restoration and maintenance, educational resources and other projects. You can find details at their website (here). 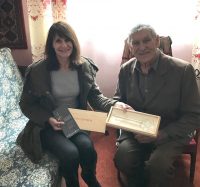 Most recently their focus has been on recovery of Jewish headstone fragments. Under both the Nazis and Soviets, Jewish cemeteries were destroyed. Headstones were broken up and used to build roads, sidewalks, and foundations for industrial buildings. Volunteers have found Jewish headstone fragments buried all over Rohatyn. They cleaned them, restored them as best they could, and returned them to the old Jewish cemetery.

You can find detailed accounts of their headstone recovery and other projects currently underway on their Facebook page, Rohatyn Jewish Heritage.

Future projects include a cleanup and rehabilitation of the old cemetery, a modest memorial space for recovered headstone fragments, and the development of educational materials to support a renewed appreciation of the intertwined communities that once lived in Rohatyn.

The Rohatyn Jewish Heritage website contains a wealth of information for researchers and anyone else interested in a deeper understanding of the Holocaust. This understanding is critical if humanity hopes to avoid repeating the bloody and deadly mistakes of the past.

Today there is an alarming resurgence of anti-Semitism around the world. Ironically, the glaring exception is where most of the Holocaust took place: modern day Ukraine and surrounding countries.

At a time when Holocaust victims are almost becoming symbolic clichés, organizations like Jewish Rohatyn Heritage are working hard to bring alive their memories.

A perfect example is a memoir of Jack Glotzer, one of the rare surviving Jewish witnesses of the German occupation of Rohatyn. His memoir is called “I Survived the German Holocaust Against All Odds.”

Jack Glotzer was born in 1925 in Rohatyn. His father was a butcher and his mother a midwife who delivered the majority of the town’s babies. He was part of a tightly-connected extended family active in the business and social world of Rohatyn. When the Nazis came, Jack’s world shrank into the ghetto.

From the ages of 16 to 19, Jack witnessed and was threatened by everything the German occupation brought onto the Jews: concentration of the Jewish community into a ghetto which enveloped the family home; repeated round-ups of Jews for deportation or execution; individual shootings and mass slaughter; the violent deaths of nearly all of his family (including his mother and both brothers); escape to the forests; betrayals and kindness; and survival to liberation – against all odds.

When the ghetto was liquidated in 1943, almost of all of Jack’s Rohatyn family was murdered. He and the few other Jewish survivors managed to escape to the nearby forests.

After a year of foraging and constant fear in the forests, Jack was drafted into military service with the Red Army. Two years later he was discharged after sustaining an injury, and returned to his home town in 1946. But the Jewish community of Rohatyn had been destroyed, so Jack sold the family house and traveled with his few surviving cousins to Poland. He managed to make his way across the border to a series of Displaced Persons camps, and eventually the United States.

There, in 1950, he met his wife Bea, herself a Holocaust survivor from Jarosław, 200km west of Rohatyn. After they raised their family and retired from the workforce, both Jack and Bea shared their experiences in the war with students and others.

Jack and his wife Bea in 1998, visiting the forest near Lopushnia where he hid from 1943 to 1944. Source: Glotzer-Barban Family Collection.

In 1998 Jack and Bea traveled to Rohatyn for the dedication of new memorial monuments at the Jewish mass graves. Soon after, Jack, Bea, and Bea’s brother assembled Jack’s memoir.

Jack passed away in 2006 at age 81. Bea continued to visit classrooms and attend meetings to tell their stories, and she joined the Rohatyn Jewish descendants group to carry Jack’s memory. Bea passed away in 2017.

Jack and Bea bequeathed their papers and their remarkable stories to their children, who hope to share them with a wider audience.

Links to free copies of the memoir are available on the website (here), along with a summary of his life as well as his memoir, photos, an interactive map and other information.

Jack Glotzer’s memoir is part of a series on memoirs of Jewish life in Rohatyn, at their website.  Do check it out.

This is Pawlina, producer & host of Nash Holos Ukrainian Roots Radio. Until next time, Shalom!