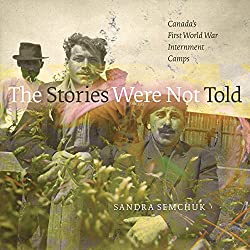 In this edition of Knyzka Corner, we will be discussing Sandra Semchuk’s book on the internment of Ukrainians in Canada, The Stories Were Not Told – Canada’s First World War Internment Camps.

From 1914 to 1920, thousands of individuals who had immigrated to Canada from the Austro-Hungarian Empire, Germany and the Ottoman Empire were unjustly imprisoned as enemy aliens.  Many of them were Ukrainian. In The Stories Were Not Told – Canada’s First World War Internment Camps, Sandra Semchuk combines her exquisite photography with historical documents, cultural theory, and poignant personal testimony from internees and their descendants.  Semchuk helps readers understand the social and emotional effects of these tragic events. In her Preface, Semchuk tells readers, “We are learning the important work of listening and speaking truthfully across cultures. Today’s fears for security in the world stir memories and experiences of racism, paranoia, and distrust of new immigrants.” (p. xxiv)

The first chapter, “Learning from the Past,” examines the historical events: Ukrainian immigration to Canada in the early 1900s, the War Measures Act of August 19, 1914, and the call for the creation of internment camps for enemy aliens. Internment camps became a government sanctioned method to imprison those falsely accused of being dangerous enemy aliens. “These prisoners were held in over twenty-four different camps all across Canada. The first camps to be open were at Montreal and Kingston.  By the end of September 1914, Winnipeg, Halifax, Nanaimo, Brandon, and Lethbridge were also sites of internment.  Women and children were held in Vernon and Spirit Lake, which opened in the cold month of January.” (p. 20)

Chapter 2, “Standing Where the Internees Stood” is an eye-opening photographic look at the current state of internment camp locations across Canada.  Readers will be shocked to find out that there were twenty-four such camps in both urban locations such as Toronto, Kingston, Winnipeg, Montreal and Nanaimo, as well as isolated camps such as Spirit Lake and Banff-Castle Mountain.

Perhaps the most powerful chapter in this book is, “Stories from Internees and Descendants,” which is dedicated to the personal testimony of internees and their descendants.  Mary Bayrak, who was born in the Spirit Lake Internment Camp, remembers how she felt, “I thought it was a terrible thing to be in a camp. We thought it was for doing something wrong… I just never told anybody about it.” (p. 95) Many accounts describe the feelings of shame, guilt, injustice and anger which internees and their families experienced.  Most families kept these experiences a secret, which contributed to the lack of knowledge of Canadians about these internment camps.

Sandra Semchuk’s book is a major step in addressing internment secrets kept by the Ukrainian-Canadian community for generations.  Marshall Forchuk, son of Yurko Forchuk, who was interned in Jaspar, Alberta, reveals that his father kept his internment a secret for most of his life, “Being detained, being jailed is, can never be a happy experience, but being detained, losing everything you’ve got and not knowing why, except the fact that you know that you did not do anything wrong. My dad didn’t do anything wrong. He lost his homestead; he lost everything that he had there.” (p. 132)

While Semchuk’s book is not a scholarly examination of internment camps, the inclusion of personal accounts, historical documents, and photographs – both current and historical – makes it a groundbreaking work in the history of Canada’s First World War Internment camps.  Her insightful commentary makes connections between Canada’s treatment of its indigenous peoples, and later Canada’s treatment of Japanese-Canadians during World War II to the internment of Ukrainians during World War I.  Semchuk tells readers, “For democracy and the protection of human rights to have meaning across cultures in Canada, it is important that these stories register, be accepted, and become a part of comprehending the roles that race and immigration have played in the building of the nation.” (p. 208)

Sandra Semchuk was born in Meadow Lake, Saskatchewan and now lives in Vancouver, where she taught at Emily Carr University of Art and Design. She is a Ukrainian-Canadian photographer and video artist who worked collaboratively for fifteen years with her late husband, James Nicholas, Rock Cree actor and orator. In 1973, she was one of the co-founders of the Photographers Gallery, an artist run gallery in Saskatoon. Her work has been exhibited in galleries across the world such as the Museum of Contemporary Photography in Ottawa, the Museum of Modern Art in New York, fotofeis in Scotland, and the Museu D’art Contemporani in Spain.  Sandra won the Governor General’s Award in Visual and Media Arts in 2018. The Stories Were Not Told combines Sandra’s unique storytelling skills with photographs and historical documents. This book is necessary reading for anyone interested in Ukrainian-Canadian history and the internment during the First World War.

The Stories Were Not Told is available at Chapters/Indigo and Amazon.