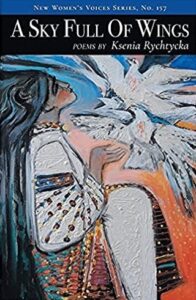 In this edition of Knyzka Corner, we will be discussing Ksenia Rychtyka’s poetry chapbook, A Sky Full of Wings.

A Sky Full of Wings is collection of twenty-five poems selected as a finalist in the 2020 New Women’s Voices Chapbook Competition. Chapbooks are short volumes of less than forty pages, which often take the form of poetry.

Rychtyka’s poems focus on family relationships, journeys, and the Ukrainian homeland. Each poem explores some aspect of the circle of life as the epigraph by Lina Kostenko suggests, “And nothing seemed accidental because it left traces on my heart.”

Throughout this poetry collection, the writer uses images of flight.  Her first poem, “Ode to Journeying” begins with the words, “If I could, I’d fly north to the land/ of Midnight Sun. Wings outstretched.” The poems in this collection are divided into four sections: Home, Journeying, Ancestral Land, and Circle of Life.  In Home, the writer remembers places she has lived, specifically Chicago and Detroit.  The poem, “What I Remember,” is full of beautiful and vivid images, “Our house is still,” “Only [the] almond refrigerator hums,” “Afternoon sun skips over kilim rug,” and “Father naps on the sofa.” These memories of her home and her father are bittersweet because, “Soon he will be gone.” There are also poems about her mother returning to Ukraine for the first time (“Watching Mother Return Home, 1990”), and her grandparents leaving Ukraine (“When My Grandparents Left Everything Behind”).  Readers with immigrant parents will definitely be able to relate to these experiences.

In subsequent poems, the writer continues her ruminations on her past and her ancestral homeland of Ukraine. She dedicates several poems to her travels in Europe. In “Backpacking Europe,” she describes her travels with her childhood friend Lila: “This is what I miss – train rushing past castles/ and farmlands.  Stone circles…” This poem is the origin of the title of this collection, “And how those crows cackled – sky full of wings.” She also describes experiences in Bruges, Bath, Brussels, Chartres, Munich, Heidelberg, Salzburg and Delphi.

Perhaps the most poignant poems describe the writer’s travels in Ukraine. Her visit to the Chernobyl region in “River Near Chernobyl” inspires her to imagine the ancestors who first ruled here, “Thousand-year-old Viking ships/ once plying this waterway from barren north/ to the gold domes of a city decked in splendor.”  The locals remember the tragedy of the Chernobyl nuclear disaster, “No one told us to leave. / Not for another two days.” The poem “Watching A Revolution From a Computer Screen Ukraine 2014” describes how Ukrainians throughout the world watched helplessly as their country fought for independence, “These streets, your streets, my streets/ are now covered in blood.  What can we do– /here, now – as black tires flare?”

The final section of the book, Circle of Life, focuses on the various generations in the writer’s family – Dido, Babstia, her mother, and her daughter. She remembers going to the state fair with her Dido in “Grandfather Revealed,” but she realizes that he never talked about his journey from Ukraine to Detroit. In “Brushing Grandmother’s Hair,” she shares poignant images of her relationship with her Babtsia, “a smart new dress,” “stooped over/ by the time I got to meet her,” and “[she] made dresses for my Barbie dolls.” Perhaps the most touching poem of the whole collection, “Slippage,” describes her mother’s battle with dementia.  Rychtycha is glad her mother doesn’t know about the Russian invasion of Crimea, “Soldiers/ slipping over the Ukrainian border seventy/ years after she’d fled all those invaders./ No, Mother doesn’t know.”

Although this is Ksenia Rychtycka’s first poetry collection, A Sky Full of Wings, is a masterful work showing her mastery of the free verse genre. This book explores many important themes including: dealing with evolving family relationships, exploring Ukraine’s history and current political reality, and coming to terms with the human cycle of life and death.  Ukrainian readers will definitely relate to images of their childhood, their history, and their community.  Other readers will be captivated by the beautiful imagery and skillful literary technique displayed in her poems.

Ksenia Rychtycka is a first-generation Ukrainian-American poet and fiction writer who was born in Chicago.  Ksenia’s poetry, fiction, and feature articles have appeared in several literary magazines including: The Dalhousie Review, The Literary Bohemian, and River Poets Journal. Ksenia worked as an editor in Kyiv, Ukraine, from 1996-2000. This experience inspired several stories in her collection Crossing the Border. This short story collection was a finalist in the 2013 Next Generation Indie Book Awards. She lives in the Detroit area with her husband and daughter and works as a freelance copy editor.

A Sky Full of Wings is available at Chapters/Indigo and Amazon.