In this edition of Ukrainian Jewish Heritage, we will be discussing Jews and Ukrainians: A Millennium of Co-Existence by Paul Robert Magocsi and Yohanan Petrovsky-Shtern. 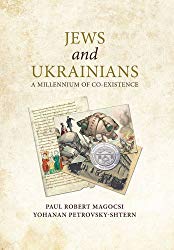 In the twelve thematic chapters of this book, the writers construct a parallel narrative of the two groups looking at: settlement patterns, history, economics, culture, religion, language, literature, theater, architecture, art, music, the diaspora, as well as contemporary political and social life. Each writer wrote separately – one concentrating on ethnic Ukrainians and one concentrating on Jews – however, they also collaborated in sections. They soon discovered that, “what emerged from our parallel narrative was a single story in which ethnic Ukrainians and Jews displayed as many similarities as differences.” (p. 1)

The book begins with an examination of how “Stereotypes, Perceptions and Misperceptions,” often based on blatant prejudice, cloud relations between Jews and Ukrainians. The relationship between the two groups goes back a thousand years.  The first Jewish settlers moved to Ukrainian lands as maritime merchants from the Mediterranean Basin.  They settled in the coastal towns of the Black Sea along with Greek colonists.  During the time of Kievan Rus, Jews started arriving from central Europe and settling in central and northern Ukrainian towns. There are references to Jewish settlers in the literature of the period.

Jews and Ukrainians continued to live together in the land that is contemporary Ukraine for hundreds of years despite rule by foreign governments.  By 1900, the inhabitants on the lands of present-day Ukraine totaled 30.6 million comprised of 72.4% ethnic Ukrainians and 8.7% Jews.  In sharp contrast, after the tragic events of the 20th century, such as the Holocaust and the Holodomor, today’s ethnic Ukrainian population is about 37.5 million with a Jewish population of only of 84,000 (.02%) living mostly in cities such as Kyiv, Odessa, Dnipropetrovsk (now Dnipro) and Kharkiv.

This volume is full of intricate information, insightful historical analysis, detailed graphics and maps, as well as very relevant photographs. At times, the detail almost seems encyclopedic, but the writers manage to make each and every section relevant and readable.  Those new to Ukrainian studies will learn a great deal about Ukraine’s history and culture.  Those who have studied both Ukrainian and Jewish culture will appreciate the commentary and the analysis of historical events. Researchers will definitely appreciate the extensive list of resources at the end of this book.

Paul Robert Magocsi is professor of history and political science and holds the John Yaremko Chair of Ukrainian Studies at the University of Toronto. Born in New Jersey, he completed his education at Rutgers, Princeton, and Harvard University. In 1996, he was appointed a permanent fellow of the Royal Society of Canada. He is interested in the history of nationalism, in particular among ethnic groups living in border areas. His recent works include: With Their Back to the Mountains: A History of Carpathian Rus and Carpatho-Rusyns (2015) and This Blessed Land: Crimea and the Crimean Tatars (2014)

Yohanan Petrovsky-Shtern is professor of Jewish studies and Jewish history at Northwestern University where he is the Crown Family Professor of Jewish Studies. Born in Kyiv, he completed his education at Moscow University and Brandeis University. He is interested in Jewish history, Slavic-Jewish literature, and the history and culture of Ukraine. His recent works include: The Golden Age Shtetl: A New History of Jewish Life in East Europe (2015), and Lenin’s Jewish Question (2010).

Magocsi and Petrovsky-Shtern have written an impressive book packed with encyclopedic detail while being as easy to read as a magazine. Although this book is unlikely to change deeply held perceptions, the writers believe that in order to properly appreciate Jewish-Ukrainian relations, “Jews need to know as much about Ukrainians as Ukrainians need to know about Jews.” (p. 290)

Jews and Ukrainians: A Millennium of Co-Existence is available at Chapters/Indigo and Amazon.

Please support our work by purchasing this book using this link. There is no additional charge to you but it sends a few cents our way. Дякую! Thank you!